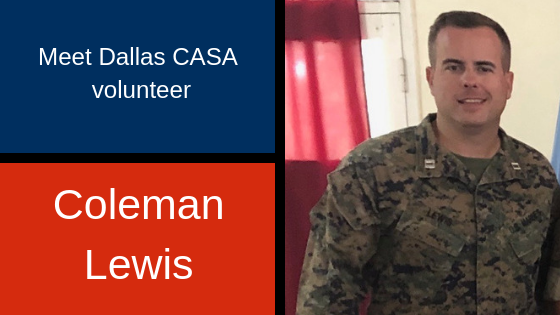 For Dallas CASA volunteer Coleman Lewis, a recent deployment to Central and South America with the U. S. Marine Corps Reserves gave him a new perspective on child welfare cases.

“Deployment is certainly much different than being in a nice office in Dallas,” Lewis said. “Down there, your eyes are really opened to the needs and struggles of people in other parts of the world. It made me grateful for my country and proud of an agency like CASA for helping out.”

After four years of active duty with the Marine Corps, including a tour in Marjah, Afghanistan, Lewis joined the Marine Corps Reserves in 2012. He was working as Power Procurement Supervisor at Pioneer Natural Resources in Irving in 2018 when he received the call to deploy to Central and South America. Leaving friends, family and his job behind, Lewis served as a U.S. military advisor in Belize, Peru, Brazil and Argentina. In Belize he assisted local police and military in their battle against narcotics, human trafficking and contraband and prepared them to serve in United Nations peacekeeping missions. In South America he taught martial arts and trained local military on tactical employment of vehicles in both urban and amphibious terrain.

“Belize is a neighbor and just a few hours away by plane, yet it’s a world away in terms of poverty and crime,” he said. “There’s no CASA down there. If an aunt or a grandma can’t help out, children are often left fending for themselves.”

“Many people are living in very dangerous, poverty-stricken places,” he said. “The children there – just due to the amount of crime and trafficking – are put in circumstances beyond their control. But as much tragedy as there is, there are also lots of happy people who love life. I was happy to do a small part to help them out.”

A native of Dallas and graduate of the University of Texas at Austin with a bachelor’s in Latin American Studies and a master’s in geology, Lewis is a major and company commander in the Marine Corps Reserves. Back in Dallas since late 2018, Lewis plans to take his third CASA case soon after settling back into his Dallas life.

“It can be difficult to pause your life, go serve and then return and turn your life back on,” he said. “But I’m ready to serve as a volunteer advocate again after I get settled in.”