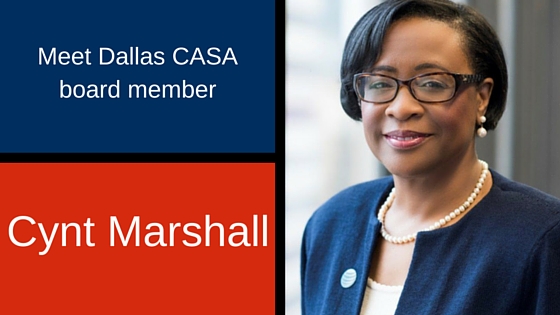 This week, on Dallas CASA’s blog, we’re hearing from Cynt Marshall. A Dallas CASA board member since 2014, she serves as Senior Vice President Human Resources and Chief Diversity Officer at AT&T.

Allow me to tell you a story.

Picture a run-down, abandoned hotel. In one of the rooms is a nine-month-old baby lying on the floor, hardly clothed, with his nine-year-old brother taking care of him. Imagine the feelings of the nine-year-old as he looks out of a dirty window and sees his mother being taken away by police.

Move your eyes around this dingy hotel room with the nine-year-old as he is searching for food for himself and his baby brother. Take a look at the toaster oven that is being used to keep the baby boy warm. Picture the nine-year-old serving as the sole caretaker of his brother until someone finally tells the police that their mother left two boys in the room at the hotel. Picture the despair, relief and sadness on the face of the nine-year-old when they are finally rescued.

Now picture a little girl who is less than one day old and weighs less than two pounds lying in a hospital with her mother nowhere in sight. Imagine a mother giving birth and walking out of the hospital that same day, leaving her premature and very sick daughter. Imagine this woman marching toward the front door, never looking back and never to return for her baby. Picture the baby girl being cared for and named by the nurses. They named her Smalleisha. “Small” because she was premature; “eisha” because she was black.

And, now, picture a 12-year-old girl being forced to eat a peanut butter sandwich alone in the pantry while the boys in her family eat turkey and dressing on Thanksgiving Day.

Imagine the despair, the heartbreak, the confusion, the pain for these children.

These are my children. That nine-year-old boy, that tiny baby girl and that mistreated 12-year-old are mine. I told you the stories of my three children.

My husband and I were blessed to adopt them with the help of lawyers and judges and, yes, CASA volunteers. These honeys were kept as safe as possible because of people who care.

I got involved with Dallas CASA because I care about the children in our community. The children Dallas CASA serves are thrust into a bewildering world of well-intentioned strangers – people who mean good for them – where the only thing that is certain about their future is uncertainty. They are scared and they are confused. CASA volunteers help children navigate this very grown-up process. They serve as the eyes and ears of the court so that a safe and permanent home might be found.

As my own life has shown me, good things can often come out of bad things. Sometimes the light at the end of the tunnel is a train. But with the help of just one person who cares about you, you can get through those bad things.