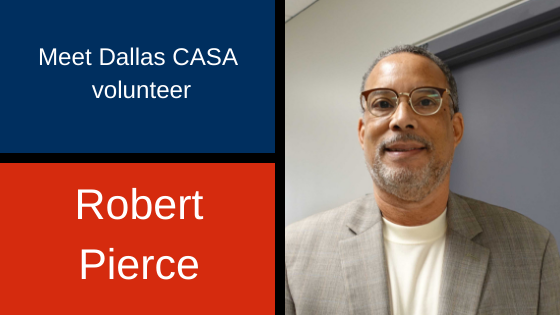 Dallas resident Robert Pierce was approaching retirement when an advertisement caught his eye.

“The ad was for Dallas CASA (Court Appointed Special Advocates),” Pierce said. “I’d been thinking about volunteering, and I thought ‘Well, this is right up my alley.’”

Retired from the US Army in 1998, Pierce taught the JROTC program at West Mesquite High School for 20 years before his second retirement. He went through 30 hours of training before being sworn in by the court as a court-appointed advocate for abused and neglected children living in the protective care of the state.

Working his third CASA case in a year and a half, Pierce said he enjoys working with teenagers. He understands the habits of teenagers – from video games to cell phones – from his years in the classroom, and he’s able to communicate and talk to them in meaningful ways.

On National Adoption Day in 2019, Pierce accompanied 14-year-old Jeremiah White, who was adopted by his foster father. With smiles and handshakes all around, Pierce reflected on the young man who enrolled in acting classes, learned to swim in the summer and made the adjustment to high school – all while navigating life in foster care.

“He’s a great kid with a great personality,” Pierce said. “We just clicked from the start.

“Every child I’ve worked with has been a good kid who happened to be in a bad situation. They need all the guidance they can get, and that’s where I think I can make a difference.”