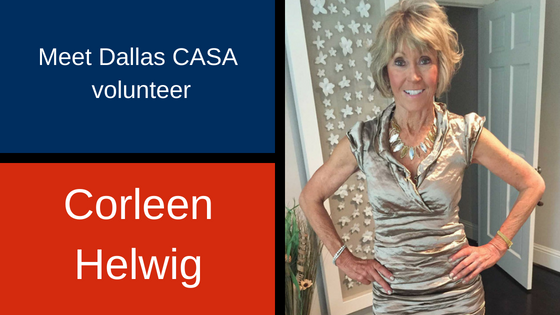 Corleen Helwig became a sworn child advocate in October of 2007. She worked two cases that closed in quick succession before being assigned a new case which has stayed open longer than usual.

You’ve been advocating for these three children a long time. What keeps you going?

I feel like their grandmother now. I can hardly wait to see them every month. I plan to stay with them until they age out of the system. We have such a wonderful bond with each other. They know they have someone in their lives who will never leave them. As they’ve gotten older, they’ve come to understand my role as their advocate better. They know I don’t get paid to do this – I’m coming just to see them, and I think that’s added something special to our relationship.

What do you tell people who say they couldn’t be an advocate because it’s too hard?

I never went in with the attitude it would be too hard. You have to divorce yourself from what happened to them and focus on the advantages I can give them. The facts are there, and the bad things already happened. I’m always focused on what positive changes I can bring for the kids.

I’ve had to do hard things in this role. For me, one of the hardest things I’ve ever done is get on the stand and advocate for terminating parental rights. I felt like “who am I to say someone is no longer a parent?” But my role was to give the facts I had gathered and let the judge decide. The kids and I have had some difficult conversations about race. I’m white and they are not. With so much tension around race right now, they know one person in their life who’s never had those issues. In the end, despite the hard things, these kids have changed my life.

Why do you keep doing it?

At this point, the kids and I are so bonded that it’s the bond that keeps me going. I think it’s the one on one time I get with each of the kids that means the most to them and me. I listen to them and let them know they’re important. How could I shirk my responsibilities when these kids need me?

Is there one thing that makes you know CASA is important?

The foster families they’ve stayed with have told me time and time again how much I mean to the kids. If the kids get in trouble at school, the foster family will say “Don’t make me call Miss Corleen” and they sit up straight. We make each other better.

I remember one time the oldest one was going through a really tough time, and he was crying to me about his life. I started crying on his behalf, and he took his hand and patted me on the knee, letting me know it would be okay. I think in that moment he really knew how much I loved and cared for him.

At the point, I am their most consistent person. I’m the one who’s kept pictures of them. I know where they came from and where they’ve been. No one else – not caseworkers, foster families or case managers – has stayed as long as I have.

Has being an advocate changed you?

You know, I’m really proud I’m a CASA. It’s given me self-worth, and I’m proud I’ve stuck with the role and these kids. I genuinely love what I do.