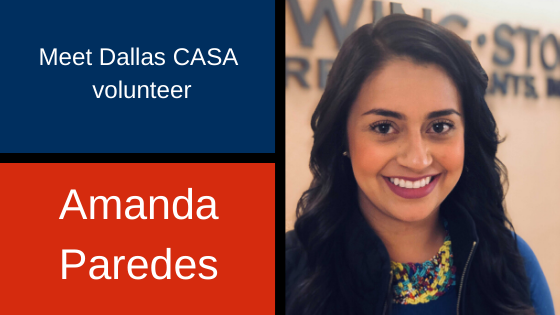 Amanda Paredes says it was her heart that drew her to Dallas CASA.

“While I signed up for plenty of one-time volunteer opportunities, my heart called me to something more lasting and personal,” she said. “One day I saw a billboard for Dallas CASA, and I just knew.”

Amanda’s bilingual skills have proved critical for the children she’s served, many of whom speak only Spanish or whose families speak Spanish. On a recent case, the Spanish-speaking young boy she was assigned to had been placed with an English-speaking family.

“When I first met him, I started off in Spanish and his whole face lit up,” she said. “He instantly started chatting and wanting to play. His foster mom said ‘Wow! You just brought out a little boy I’ve never seen.’ I grew up speaking both English and Spanish at home, and I took for granted being in a home where everything around you looks, feels and sounds familiar. Being able to offer a shared language has really made a difference.”

It doesn’t hurt that she sometimes brings along Mexican pastries.

Now, Amanda says it’s her heart that’s kept her focused through six cases. “These kids steal my heart each time,” she said.

She’s seen firsthand how many cases a single Child Protective Services caseworker can have, and she’s not willing to let a child’s future be overlooked.

“I admit it can be emotionally draining and frustrating, but what keeps me going is the child – the smile of the little boy who recognized me, the first time a teenager made eye contact with me and laughed at my joke,” she said. “While the start of this journey was with the vision to support children who needed someone, I’ve quickly learned that this experience has taught me so much about my own values and mission.”