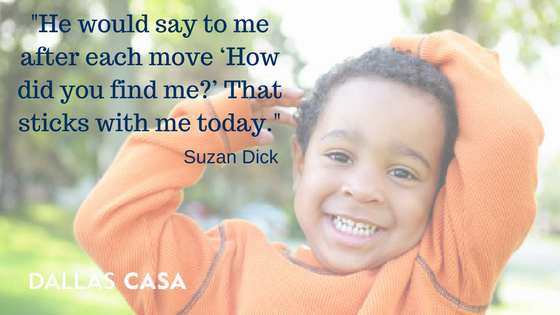 The first time Dallas CASA volunteer Suzan Dick met the children she would be advocating for, the brother and sister were eating dinner in their foster home.

Sofia and her brother Samuel, 5, had been removed from a home where they lived with no food, no electricity and no running water in the home. Their parents were addicted to drugs.

The foster parents had to teach them basic bathroom hygiene, how to use a washcloth and not to eat until they made themselves sick. They hid food under the beds and pillows, afraid they might not get fed. They refused only one type of food – cereal because the only cereal they’d ever known was infested with bugs. Through the next two years in foster care, Sofia and Samuel moved homes several times, shuffling between relatives’ homes and foster care as their mother and father battled drug addiction. In each home, Suzan came to visit them.

“I learned to be ready to catch them for the running hugs they gave me,” she said. “Samuel would say to me after each move ‘How did you find me?’ That sticks with me today. It breaks my heart that a child could feel so lost in the system that he didn’t think adults who cared would be able to find him.

“Despite all they’d been through, the children were charming and delightful with the sweetest, most incredible personalities. Everyone loved them.”

Suzan advocated for therapy for the kids and she visited them regularly. She made sure doctor appointments were kept and observed weekly supervised visits with their parents. She saw the love and affection between the children and their parents.

Today, Sofia and Samuel’s parents have successfully completed drug rehabilitation. After a carefully monitored return home, Sofia and Samuel and their parents are a family again. “Seeing the kids’ parents off drugs was like meeting brand-new people,” Suzan said. “They are different people sober.”

At Suzan’s last visit with the family, she joyfully watched as Sofia and Samuel came home from school, grabbed an apple out of the fruit bowl on the table and started their homework under their mother’s watchful gaze.